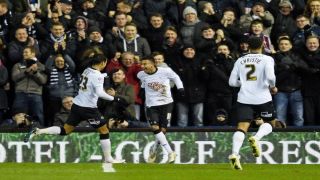 Steve McClaren's side returned to the summit by beating Sheffield Wednesday on Saturday as Bournemouth and Middlesbrough suffered defeats and a fourth successive home win three days later ensured they remain top.

Republic of Ireland midfielder Hendrick opened the scoring after only nine minutes and on-loan Manchester United man Lingard opened his account for Derby in his first start eight minutes later as Charlton's two-game winning run came to an end.

Middlesbrough are in second spot after they responded to a 1-0 home defeat to Leeds United by beating Bolton Wanderers by the same scoreline courtesy of Albert Adomah's first-half strike.

With Bournemouth facing a trip to Nottingham Forest on Wednesday, Ipswich Town took the chance to move above Eddie Howe's side into second spot by seeing off Birmingham City 4-2 - Freddie Sears scoring twice.

Bradley Johnson's screamer six minutes from time ensured in-form Norwich City won 2-1 at Blackburn Rovers to move level with Bournemouth in fifth spot, while Watford are also on 59 points as a result of a 3-0 home win over Fulham.

Jon Toral scored a hat-trick as Brentford hammered bottom side Blackpool 4-0, with Lee Clark's side up against it after Charles Dunne was sent off just before half-time.

Wolves cruised to a 3-0 victory over Fulham, while Wigan Athletic remain deep in the mire following their 1-0 home defeat against manager Malky Mackay's former club Cardiff City and struggling Millwall lost 3-1 at home to Sheffield Wednesday.

Huddersfield Town were 3-0 winners over Reading in the other Championship clash to be played on Wednesday.

Bristol City moved five points clear at the top of League One by winning 3-1 at Doncaster Rovers, while Massimo Luongo scored both goals as Swindon Town ended a three-match losing streak by winning 2-1 against fellow promotion-hopefuls Bradford City.

Preston North End and Sheffield United kept their promotion pushes on track by beating Walsall and Rochdale respectively, while managerless Barnsley were 1-0 winners at Scunthorpe United.

Burton Albion missed an opportunity to go six points clear at the top of League Two when they lost 1-0 at Accrington Stanley, while two late goals from Ryan Taylor gave Portsmouth a 3-2 win over Tranmere Rovers.

There were no goals in the other League Two clash involving Cambridge United and AFC Wimbledon.