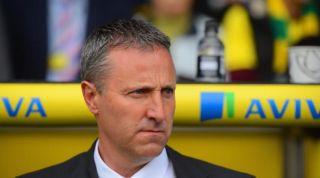 The striker went close to adding a second after 56 minutes when Bolton goalkeeper Lonergan tipped his shot onto the post after a neat one-two with Kyle Lafferty.

However, there was no stopping Jerome's 61st-minute header from Gary O'Neill's corner to put the home team in control.

Lee Chung-yong managed to pull one back for Bolton late on after latching onto Martin Olsson's weak header, but Norwich held on for the victory that saw them join Derby County, Watford and Wolves on 26 points.

In League Two, Accrington Stanley continued their good run of home form when beating Morecambe by the same scoreline.

Luke Joyce gave Accrington the lead from the penalty spot after five minutes following a foul on John O'Sullivan by Alan Goodall.

Shay McCartan then doubled the advantage six minutes later with a long-range strike for his third goal in as many games.

Accrington had on-loan Fulham goalkeeper Jesse Joronen taken off on a stretcher towards the start of the second half and Paddy Mullin pulled one back with a close-range header in the 51st minute.

However, despite nine minutes of injury tme, Morecambe could not force a leveller as the Accrington climbed to ninth, level on 23 points with their visitors.