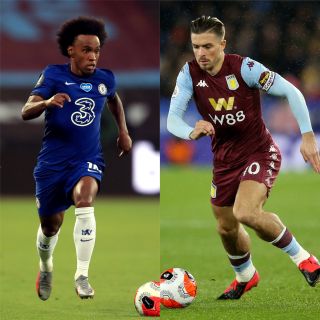 Willian could be set to stay at Chelsea after all, with a breakthrough reached in contract negotiations, according to Sky Sports. Several clubs had been circling for the 31-year-old Brazilian, who was rumoured to want to leave Stamford Bridge, including Arsenal, Manchester United, Barcelona, and David Beckham’s Inter Miami. However, the winger is tipped to sign a new contract with Chelsea this week, despite being offered only a two-year extension instead of his preferred three.

Manchester United are still poised to sign Jack Grealish from Aston Villa, although he has been warned he would not be a certain starter for the Red Devils every week, The Independent reports. Ole Gunnar Solskjaer is still keen to sign Grealish even if United complete the transfer of Jadon Sancho from Borussia Dortmund. United are likely to have to up their ante from their initial £90m bid for Sancho, but will not meet Dortmund’s desired £110m, the Daily Mail says. The Old Trafford club will likely be also forced to go above their envisaged £50m to sign Grealish now that Villa will stay in the Premier League, but at least Champions League qualification has given Solskjaer more spending power.

Chelsea are edging closer to signing Kai Havertz from Bayer Leverkusen, the Daily Mail reports. The 21-year-old forward is keen to team up with fellow Germany stars Antonio Rudiger and Timo Werner at the London club, and Chelsea are in negotiations with Leverkusen for a deal said to be worth £73million.

Leicester could have the front-running on signing former Chelsea forward Bertrand Traore from Lyon, the Daily Mail says. The French club values the 24-year-old at around £30m, but are open to negotiation as financial troubles have left them looking to sell a number of players. The Foxes are understood to be been to bolster their forward ranks with the Burkina Faso international.

Leicester are also still in the bidding for Philippe Coutinho, according to Sport. Tottenham are also interested in the 28-year-old former Liverpool playmaker, who is out of favour at Barcelona. Arsenal, however, appear to hold the front-running, with Coutinho reportedly asking the Gunners for more time to decide his future.

Sokratis' time at Arsenal could be nearing an endhttps://t.co/YKh6w66epr— Mirror Football (@MirrorFootball) July 28, 2020

Max Aarons: The 20-year-old right back looks set to leave relegated Norwich, with Bayern Munich will to pay £18.3m for him, Sky Sports reports.

Cameron Coxe: The Wales under-21 defender is set to join Manchester City after being released by Cardiff, according to Wales Online.