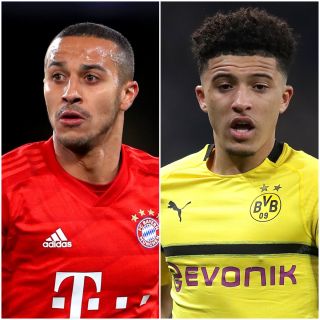 The Daily Star reports Manchester City have entered the race for Bayern Munich midfielder Thiago Alcantara. The paper, which cites Germany’s SportBild, says Liverpool have been dealt a blow in their hunt for the Spain international’s signature, with City offering more money for 29-year-old.

The transfer focus at Old Trafford is solely on securing Jadon Sancho, reports the Daily Mirror. The Red Devils have put the rest of their transfer business on hold as they try to beat a host of other for the signature of Borussia Dortmund’s 20-year-old England forward.

Watford are preparing to demand a club-record fee of £40million for Ismaila Sarr, according to the Evening Standard. Liverpool, Wolves and Crystal Palace are all interested in the 22-year-old, while LaLiga and Bundesliga sides have also scouted the winger.

Lyon sporting director Juninho has said Houssem Aouar may leave the club this summer, with the Daily Mail saying the midfielder could find a home at Manchester City, Arsenal or Juventus. The French side value him at £44m, and Lyon president Jean-Michel Aulas may not let him leave after saying everything will be done to keep the 22-year-old at Olympique Lyonnais.

Joelson Fernandes: The Daily Mirror says Arsenal want to sign the 17-year-old forward, who has been called the new Cristiano Ronaldo, from Sporting Lisbon.