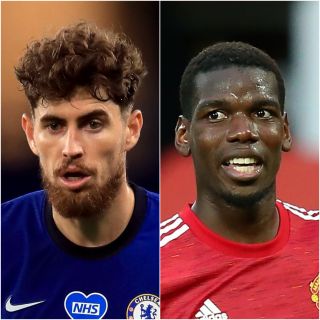 Jorginho will begin talks with Chelsea about a contract extension, according to the Daily Express. The Italy midfielder, who is currently at Stamford Bridge until 2023, was linked to Arsenal and Napoli during the summer. The paper cites Italian outlet AreaNapoli as reporting the Blues are willing to secure the 28-year-old on a new long-term contact.

Manchester United may not be able to keep Paul Pogba, with the France international potentially leaving for the continent. The Sun quotes Spain’s Mundo Deportivo as saying Barcelona think they will be able to snatch the midfielder, 27, on a free transfer next summer.

Said Benrahma will complete a medical with West Ham on Thursday ahead of his mooted move from Brentford. The Daily Mail says the forward has agreed personal terms for a five-year deal with the Hammers, whose manager David Moyes is hopeful of also signing 28-year-old Norway international Josh King from Bournemouth.

Derby are about to make Wayne Rooney their new manager, the Daily Mirror reports while citing The Sun. Once Phillip Cocu is dismissed the Rams, who are in 20th spot in the Championship, will bring the 34-year-old club captain into the top spot.

Sergio Aguero: The 32-year-old Argentina striker is not keen on leaving Manchester City for Inter Milan, according to Fabrizio Romano in Sports Illustrated.

Karlan Grant: West Brom will bring the 23-year-old striker across from Huddersfield for £15 million following a medical on Thursday, Sky Sports reports.