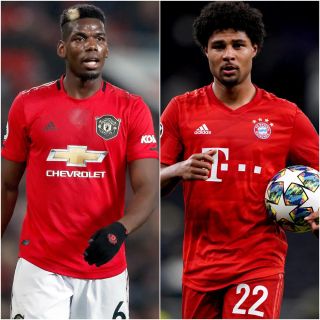 Paul Pogba is expected to part ways with Manchester United in the summer, but the club are stringently holding on to the 26-year-old’s £150million valuation price, according to the Daily Mail. Although United are believed to be open to transfer talks with any serious bidder, there are doubts as to whether Barcelona, Real Madrid or Juventus could afford such a hefty pay packet. However according to the Mail, Pogba’s value will only decline in the lead-up to the transfer window and Real Madrid’s £50m offer may be the best deal the club can get.

Manchester City are believed to be eyeing a deal for Bayern Munich winger Serge Gnabry in a deal that would also send current City winger Leroy Sane to the German giants. The Sun reports City manager Pep Guardiola has watched Gnabry in person multiple times in recent months and has been very impressed with the 24-year-old’s performances.

Back to United, The Independent says the club are considering former Paris St Germain sporting director Antero Henrique and former RB Leipzig coach Ralf Rangnick for their technical director role. Sources close to Henrique suggest the 51-year-old is nearing a deal, however Rangnick is supposedly favoured by some senior figures at Old Trafford.

Stoke midfielder Giannelli Imbula is in discussions with Russian club Lokomotiv Moscow, according to the Daily Mail.

Daley Blind: Arsenal could make a move for the ex-Manchester United defender who is currently on the books at Ajax, The Sun reports.

Martin Braithwaite: Barcelona are free to pursue the 28-year-old Leganes forward as an injury replacement for striker Ousmane Dembele, Sky Sports have said.

Dayot Upamecano: The RB Leipzig defender knows he is being courted by a number of clubs, including Barcelona and Arsenal, according to the Evening Standard.