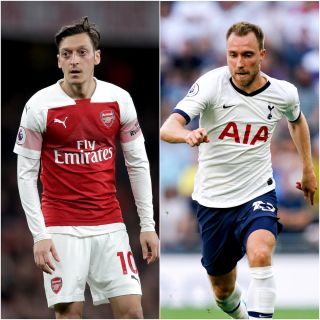 Unai Emery has not ruled out cutting Mesut Ozil from Arsenal’s squad in January, according to The Sun. When pressed on whether the German, 30, could leave during the transfer window, the Gunners’ boss said: “He’s our player now.” Ozil is the club’s highest-paid player, earning £350,000 per week – but appears to have failed to gel with Emery in recent times and has not been favoured on the pitch.

Christian Eriksen could be leaving Tottenham for a move to LaLiga, the Daily Star reports. The Danish international’s agent is expected in Spain for talks with Real Madrid this weekend. The midfielder had been flagged as a Bernabeu target but Madrid boss Zinedine Zidane ended the speculation. The midfielder, 27, has since refused to sign a contract with Spurs and will become a free agent at the end of the season.

Former Arsenal forward Lukas Podolski has cheekily suggested that ex-Gunner Serge Gnabry should be named as the north London side’s player of the month. Gnabry piled on four goals in Bayern Munich’s 7-2 demolition of Tottenham, his former club’s biggest rivals. The German, 24, only appeared for the Gunners 18 times before being loaned to West Brom and then sold to Werder Bremen. The Daily Mirror said Podolski replied to a poll launched on Twitter by Arsenal for their player of the month with a gif of Gnabry waving, with a subsequent tweet by the 34-year-old responded to by Bayern’s English account with three laughing emojis.

Nathan Jones‘s poor nine months in charge of Stoke will not be ended by the appointment of Chris Hughton, according to the Daily Mirror. The former Brighton manager has turned down the Potters, who currently sit bottom of the Championship ladder. Hughton reportedly said no because he wants to return to the Premier League, where he also coached Newcastle.

Burak Ince: The 15-year-old Turkish player has attracted interest from Manchester City and Lille and is now being linked with a move to Leicester, according to Leicestershire Live which cites Fotosport.

Alfredo Morelos: The Rangers and Colombia striker is reportedly being monitored by LA Galaxy, the Daily Star says.