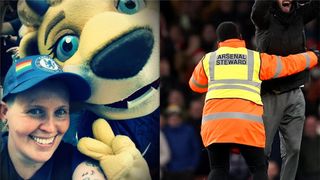 Stewards at football stadiums should be trained to identify and report anti-LGBT abuse in the stands, charity Stonewall has said.

The organisation’s comments come after reports of homophobic chants by Manchester United fans at Stamford Bridge on Monday night.

United and Chelsea have both condemned Monday’s incident, but the PA news agency understands the FA will not investigate it.

Mr de Santos added stewards “know what racism looks like” but there is a “grey area” that should not be there with regards to anti-LGBT language.

He said that lifetime bans “don’t necessarily have to be the only answer” adding that punishment should be given to change behaviour.

Tracy Brown, co-chair of LGBT fan group Chelsea Pride, was at the game on Monday evening and said the chant was sung for a large part of the game.

“I was getting messages from people watching at home who could clearly hear it,” she told PA.

“The FA need to treat homophobia the same as every other form of discrimination and investigate the incident.”

It came on the same week that the late Justin Fashanu, the first male English professional to come out as gay while playing, will be inducted into the National Football Museum’s Hall of Fame.

Former Norwich and Nottingham Forest striker Fashanu, who was also the first black £1 million footballer, took his own life in 1998.

“We have come a long way – Justin came out into that world that really wasn’t ready for him,” Stonewall UK’s director of Sport, Robbie de Santos, told the PA news agency.

My fellow @norwichcityfc@ProudCanaries have produced this scarf celebrating #JustinFashanu and his Goal of the Season. I’m more than proud to wear it today – his birthday – and the day he is inducted into the @FootballMuseum Hall of Fame 💛💚🌈⚽️ #OTBCpic.twitter.com/82RhEHF1Uc— Stephen Fry (@stephenfry) February 19, 2020

Mr de Santos said despite significant improvements in football since the 1990s hate speech has risen in the past two years.

“I’m keen to clarify this is not an endemic problem but that minority of fans is going to spoil the experience for the majority if all of us don’t stand up and play our part.

He said that could include reporting incidents to clubs or authorities or “just checking your mates and making sure they aren’t saying anything out of order”.

Newcastle fan Ian Pearson-Brown said he has dealt with mental health issues due to coming out and that some slurs, particularly the word faggot, had a “huge negative impact” on him.

“If in doubt don’t use the term… it can have a lasting impact on quite a few people,” the 38-year-old chair of United with Pride said.

“Find some other insult or nickname to call them, there’s plenty out there – we can call a Sunderland fan 99 different things but a homophobic slur shouldn’t be one of them.”

George Rice, campaigns officer for Arsenal fan group Gay Gooners, said many who shout offensive things do not intend to be homophobic.

“Nine times out of 10, we explain to people that it offends us as fellow Arsenal fans and the perpetrators are genuinely apologetic,” he said.

Paul Amann founded Kop Outs, a Liverpool LGBT fan group, commended the induction of Fashanu into the football hall of fame but said it was “long overdue”.

“We look forward to the day when a player coming out is unremarkable, and they are judged only by the content of their character and skill on the pitch,” he said.

“Right now there is a rise in (hate speech) incidents, this needs good fans to stand up and be counted, to make it clear that there is no space for bigotry in football.”

Stonewall’s Mr de Santos praised steps forward such as the Rainbow Laces campaign – which Stonewall took control over from PaddyPower four years ago.

“In that time we’ve gone from the football bodies tentatively supporting that campaign to wholeheartedly embracing it,” he said.

“You have clubs kind of trying to outdo each other in having the most impressive activations in support.”