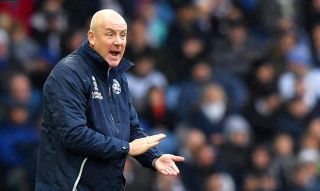 Mark Warburton returned to the City Ground to deliver a minor blow to Nottingham Forest’s promotion push after his QPR side hung on for a 0-0 draw.

Forest had far more chances as they looked to keep pace with the automatic promotion spots and maintain their position in the top six of the Sky Bet Championship.

They failed to make their opportunities count, though, with the closest they came to a goal being when Joe Worrall had a header chalked off because the ball had been moving when Joe Lolley delivered a corner.

Lolley then planted a header wide in the dying seconds, as Forest missed one last chance to take all three points in a game they dominated.

Forest thought they had taken the lead when Worrall flicked home a header from a Lolley corner but, with the two sides almost ready to restart the game in the centre-circle, the goal was ruled out.

The ball had been moving when Lolley struck the corner, and replays showed it was the right decision, but the lengthy delay left Forest fans frustrated.

The hosts came close to breaking the deadlock moments later when Sammy Ameobi hit a driven shot, which Liam Kelly saved brilliantly, as he pushed it over the bar with the slightest of touches.

Lewis Grabban fired a decent chance over the bar, Lolley drove an effort wide, after making room for himself with a driving run, and Adama Diakhaby had a powerful strike bravely blocked in the box.

Forest had been forcing all the pressure but QPR might have taken the lead when Yoann Barbet hit a free-kick which forced an awkward save from Brice Samba in the swirling wind.

The home side continued to look a threat from corners, with Tiago Silva almost scoring directly from one, as his curling ball bounced away off the bar.

Grabban flicked a header across goal and wide as Forest picked up where they had left off after the break.

Ebere Eze was not too far away with a curling free-kick for QPR, although Samba looked to have it covered as it bounced wide.

Forest made three changes as they looked to find a breakthrough as the second half went on, as QPR looked to hold on for a point.

Lolley cut inside from the right but saw his shot easily saved by Kelly at the near post – and the winger missed one last chance to break the deadlock in added time, when he headed wide.