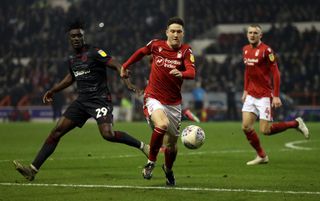 Lolley’s winner came in the 14th minute when a half-cleared corner dropped kindly and his volley took a wicked deflection to spin into the top corner.

The setback rattled the Bees who rarely looked at their best in a niggly and ill-tempered first half, disrupted by a string of physical challenges from an uncompromising Forest midfield.

The home fans’ mood was not helped by the visitors’ persistent time-wasting from the first whistle, which saw keeper Brice Samba booked after just 24 minutes.

Brentford started frenetically and a flurry of misplaced passes on a difficult hard pitch set a tempo which the Londoners failed to work their way out of for the 90 minutes.

The Bees’ Bryan Mbeumo tested Samba with a cross-shot early on as the forward line failed to kick into gear in the face of some physical Forest challenges.

Watkins, saw a neat shot and turn after a slick one two with Mbeumo bobble just wide of the upright with Samba flat-footed.

And Said Benrahma went close midway through the half with a dipping drive from the edge of the area which Samba dealt with comfortably.

The hosts’ Christian Norgaard should have hauled the Bees back into it in the 36th minute but sliced his volley from a pinpoint Mathias Jensen cross wide with the goal gaping.

Benrahma, who rarely looked his usual self in the first half, came in for some rough treatment from the Forest midfield but referee Tim Robinson offered little protection.

The official, who incensed the Griffin Park crowd by failing to handle Forest’s ‘game management’, booked the Algerian for lashing out after he had been forced to take evasive action from two scything tackles just before the break.

Forest were always a threat as Brentford pushed on after the break, and former Bee Lewis Grabban squandered a gilt-edged chance to make it two straight after the restart.

A long ball forward dropped kindly for him and he outmuscled Ethan Pinnock to fire in a volley which Bees keeper David Raya stopped at point blank range.

Grabban went close again just after the hour, but his header at the far post lacked the power to trouble Raya, who watched a Sammy Ameobi effort curl just wide minutes later.

Benrahama was closely shackled all evening but wriggled free to set up left back Rico Henry whose first-time effort on 77 minutes was straight at Samba.

Substitute Emiliano Marcondes forced a fingertip save from Samba with the clock ticking down, but in the end Forest’s resistance could not be beaten as they made it five wins from their last seven games to stay top of the form table.