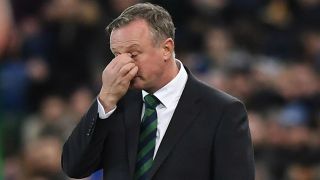 Michael O'Neill wants Northern Ireland to "forget the Nations League was ever invented" after Sunday's last-gasp loss to Austria left them without a point from all four games.

A fine Valentino Lazaro goal three minutes into stoppage time ensured a poor campaign ended on a low note for O'Neill's men as Austria ran out 2-1 winners at Windsor Park.

Corry Evans had levelled after Xaver Schlager's opener, but the hosts could not hold on and O'Neill just wants his side to put the whole competition firmly behind them.

"We got punished at the end. Stuart [Dallas] could have put the ball out of play and the game was over," he said.

"It was a fantastic finish that separates the teams. It is very sickening to lose the game like that.

"There are more positives than negatives. We just have to forget the Nations League was ever invented and be ready to go again in March."

Despite recent setbacks, O'Neill has overseen a period of marked improvement with the national side, guiding them to the knock-out phase at Euro 2016 and narrowly missing out on a spot at this year's World Cup.

With that in mind, O'Neill remains confident that Northern Ireland's future is bright.

"We watched from the outside for so long, in terms of going to tournaments, and we never realistically believed we would be back," he said. "France changed that. The road to Russia changed that. We need a similar campaign in the next Euro qualifiers.

"The team is ready to compete. You could have a wonderful Nations League campaign and start believing you are in a better position than you are. I believe the boys are capable of mounting another big challenge again in the qualifiers."