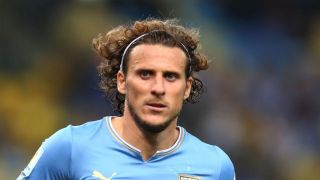 The 35-year-old forward played 112 matches for Uruguay and scored 36 goals, while he represented his country at three World Cups, winning the Golden Ball in 2010 as the best player of the tournament in South Africa.

Forlan, who is on the books at Cerezo Osaka, revealed his international retirement at a press conference in Japan, which was simulcast on his official website.

"It was a privilege to enjoy the national team and be part of a group that gave so much to our country, wear the shirt with great people," Forlan said.

Forlan was part of Uruguay's Copa America-winning side - the country's first in 16 years - in 2011, while he finishes his career 13 games ahead of the South American nation's next most-capped player, Benfica defender Maxi Pereira.