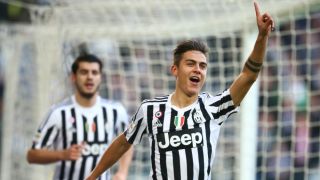 Paulo Dybala believes developing a strong mentality has been key to his impressive form for Juventus so far this season.

The 22-year-old struck a brilliant free-kick as the champions extended their winning run to eight Serie A games with a 3-0 home victory over Verona on Wednesday.

Dybala has now netted 11 times in his first season with the champions and he has credited his impressive transition to life away from Palermo to a more committed approach to every game.

"When I arrived here, I altered my approach, understanding that to have a strong character means everything," he said afterwards. "For example, if I lose possession of the ball, I try my utmost to win it back.

"I don't consider myself one of the leaders, as there are so many important and experienced players around, but wearing this shirt comes with a great responsibility and I feel that I've matured here.

"We always need to work for one another, as we did today. It was useful to break the deadlock early on and, after the second goal, we were pretty comfortable before Simone [Zaza] put the game to bed with our third goal."

Dybala admits that regular free-kick contests in training have helped him to sharpen up his dead-balls skills.

"Looking back at it, I have to admit that I caught the ball well. The keeper wasn't able to get across in time," he said of Wednesday's strike.

"We've been practicing dead-ball situations a lot in training and even have competitions to see who's the most accurate. I've still not won one of these, but I'm delighted to have scored today."

Juventus remain three points behind Inter in the table after the leaders beat Empoli 1-0.