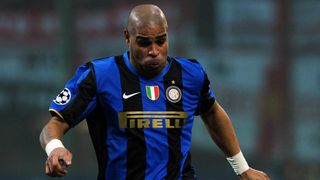 Adriano said he has unfinished business as the former Inter and Brazil star announced plans to return to football.

The 35-year-old has not played since his brief stint with Miami United in 2016 but the Copa America and Confederations Cup champion is eager to make a comeback in 2018.

Compared to countryman and icon Ronaldo at the peak of his career, Adriano never fully fulfilled his potential due to a number of off-field issues.

However, Adriano – who won four Serie A titles with Inter and scored 74 goals in all competitions for the Italian club having also played for Roma, Fiorentina, Parma, Flamengo, Corinthians, Sao Paulo and Atletico Paranaense – wants to end his career on a more satisfying note.

"I'm preparing myself for a new project, I'll be back on training in January. Without a club," Adriano told TV Globo.

"Ever since I stopped, I have succeeded in maintaining my shape. I want this and I know I'll have to persist.

"I want do this for myself, I want to show I can reach my limits so I can tell if I can play or not.

"I couldn't complete my career as a whole. Something's happened and pushed me away from football. I can say [my career] stopped at the half."