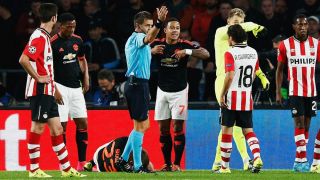 Former referee Graham Poll claims Nicola Rizzoli should have sent off Hector Moreno for the challenge on Luke Shaw during Manchester United's defeat to PSV.

The Mexican's challenge on Shaw in the first half left the England international with a double fracture to his right leg which will rule him out for a considerable length of time.

Moreno went unpunished for the tackle and scored the equaliser for PSV at the end of the first half, before Luciano Narsingh's header won the game for the Dutch champions.

And Poll has criticised referee Rizzoli for failing to award a red card and a penalty for the incident, writing in the Daily Mail: "Rizzoli couldn't have saved Luke Shaw from breaking his leg but he could and should have punished PSV defender Hector Moreno.

"Moreno should have been reprimanded for the terrible tackle which caused Shaw the horrific double fracture of his leg.

"Moreno showed no regard for his opponents safety when he flew in to tackle Shaw as the Manchester United defender burst into the PSV penalty area.

"His leading leg might have touched the ball but the way he entered into the challenge ‒ at pace and off the ground ‒ he had no control over his actions.

"Rizzoli knows the law and, while the tackle might have looked worse in slow motion replays which the referee does not see, he should detect and punish such tackles made with excessive force.

"He is one of UEFA's very best officials but he missed a poor tackle here which also should have resulted in a penalty for United as well as the red card for Moreno.

"That the Mexican then scored the equaliser really did highlight what a costly mistake the referee made."

Moreno apologised after the match, telling SBS:  "I feel really sorry for him and I feel really bad because I know how it's like.

"This happened to me as well during the World Cup [vs Netherlands]. I want to wish him all the best, but it wasn't my intention to injure him. I'd rather it didn't happen."