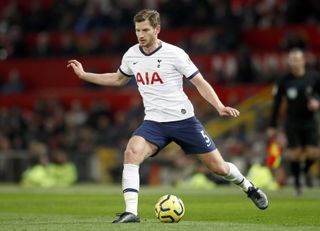 The 33-year-old left Spurs at the end of the season after eight years in north London after the club decided not to renew his contract.

He has now joined Portuguese side Benfica on a three-year deal and wants to win trophies.

“If you look at the Benfica team now it is a great team and it is one of the goals to continue playing in the Champions League and I definitely think we can achieve those things.

“Six years at Ajax and eight years at Tottenham, that reflects the way I want to be as a footballer, I like stability and that is what Benfica offered me and that was very important for me. That was the most important thing in me signing, I really felt the confidence.

“Benfica is a club of the people, with ambition domestically and in Europe and that was important to me, I really want to achieve things and Benfica has the same ambitions that I have.”

The Portuguese club have also announced the arrivals of Brazilian winger Everton and striker Luca Waldschmidt.