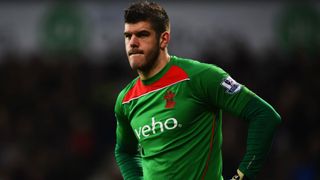 Southampton goalkeeper Fraser Forster is remaining coy on his chances of securing a starting place for England at Euro 2016.

Forster made his return from injury midway through January, and the 27-year-old has managed to keep clean sheets in all four of his Premier League appearances.

His numerous saves against Arsenal on Tuesday saw manager Ronald Koeman label his performance as "magic" and the Dutchman referred to him as one of the best keepers in Europe.

While competition for the number one England spot heats up, Forster insists he is only focused on performing at club level.

"He [England manager Roy Hodgson] was always checking up on me and seeing how I was getting on, he was always there for me if I needed to speak to him," Forster said.

"For me it is just about playing well for Southampton and enjoying playing football. I'm just delighted to be back. Everything else is a bonus. I felt good, I felt I'd never been away."

Joe Hart, Ben Foster and Jack Butland are all in contention to make the squad for the European Championship in France later this year.

"There are four of us now with Foster back from injury as well. Jack's obviously been around for a while playing with England Under-21s. He's a top keeper and that's what spurs you on to be better – having that competition," Forster said.

"It is one of them where I haven't even thought about it. Obviously the Euros is there but for me it is just a case of playing week in, week out for Southampton and then see what happens.

"I've been out for so long and I'm just delighted to be back doing the thing I love."