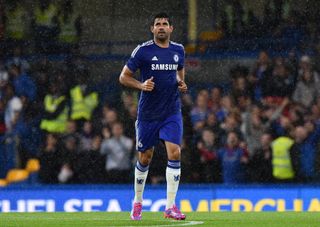 Chelsea moved quickly to ensure they last the course this time around, bringing in striking firepower in the form of Diego Costa from Atletico Madrid, while former Arsenal playmaker Cesc Fabregas also made the move from La Liga as he swapped Barcelona for Stamford Bridge.

Both men are set to be pivotal figures for Mourinho in 2014-15 and Filipe Luis also appears a shrewd acquisition to replace the long-serving Ashley Cole.

Returning hero Didier Drogba adds further muscle in attack, but is a doubt for the season opener after sustaining an ankle injury during a pre-season friendly against Ferencvaros.

But perhaps the greatest intrigue surrounding an impressively strong Chelsea squad is the battle for the goalkeeping position.

Petr Cech has been a mainstay of their success during the modern era, but Thibaut Courtois' return following three impressive years on loan at Atletico, picking up the Liga title and starring en route to the UEFA Champions League final alongside Costa and Luis last season, leaves Mourinho with an enviable decision to make ahead of the Turf Moor showdown on Monday.

"I can't tell you [which goalkeeper will play] because they don't know and the team doesn't know," the Portuguese said in his pre-match press conference.

"What I can say is that in my opinion, with all respect to fantastic goalkeepers around the world, I think Chelsea has two of the three best goalkeepers in the world, which is unique."

Mourinho continually played down his team's title prospects last term, but he accepts that Chelsea are among the front-runners this time around.

"This season obviously we bought some key players, we believe and we are feeling that the new players have brought the squad and team into another dimension," he said.

"Yes we are title contenders, if you expect me to say we will win the Premier League I can't say that. I can't because I have to respect the competition, which is the only [league] that has more than two title contenders.

"I have to respect the opponents and efforts the other teams made to improve their already top teams, but we all feel we are title contenders."

Burnley undertook a predictably more low-key approach during the close-season following their surprise march to an automatic promotion place in a magnificent 2013-14.

Wolves left-back Stephen Ward became the seventh recruit on Friday ahead of their top-flight return, while Lukas Jutkiewicz has enjoyed a prolific pre-season since signing from Middlesbrough.

"There will be a vast gap in resources available, that's the reality of it," said manager Sean Dyche - affectionately known as 'Ginger Mourinho' by the Burnley faithful - at a pre-match press conference.

"There are probably still eight Championship clubs I could name off the bat who have got a better player wage level than we have now.

"But look at what you've got, not what you haven't. We have to find a way of operating to get where we want. Behind my extremely bouncer-like look, there are a couple of brain cells in there."

Five years ago, Burnley memorably won their opening Premier League home game of the season 1-0 against Manchester United and Dyche is not ruling out another upset.

"Was it Cardiff who got three points off Man City early last season? I don't think many would have been expecting that."