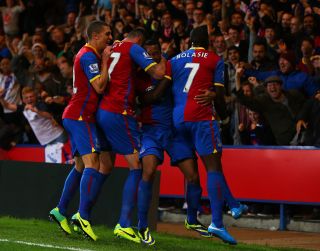 The 50-year-old's 11-month stint at the London outfit came to end on Wednesday, with the club winning just one of their eight top-flight fixtures this season - a 3-1 triumph over bottom side Sunderland in August.

Palace have subsequently lost five on the bounce and Holloway's fate was all but sealed following a 4-1 home defeat to Fulham on Monday.

They have not suffered six losses in a row since March 2001, when they were playing in the second tier of English football, and face a difficult task against Arsene Wenger's side, having taken just five points from eight previous Premier League encounters against them.

Keith Millen takes temporary charge of the team and has no fresh injury worries, with Glenn Murray (knee), Jack Hunt and Jonathan Williams (both ankle) all long-term absentees, while centre-back Patrick McCarthy will hope to at least feature on the bench after recently returning to training following a groin injury.

Arsenal head into the fixture as overwhelming favourites after taking 19 points from a possible 24 this season.

Wenger's charges are unbeaten in their previous 13 away games in all competitions, winning 11 and drawing two.

But they will be looking for a swift response from their 2-1 setback at home to Borussia Dortmund in Tuesday's UEFA Champions League fixture at the Emirates Stadium.

Olivier Giroud had cancelled out Henrikh Mkhitaryan's opener, but Robert Lewandowski struck late on to inflict Arsenal's first defeat in Europe this season.

However, Giroud insists the team will not panic and are looking for a strong showing against Palace.

"We lost but have won almost every game," the Frenchman told the club's official website.

"Just Villa and West Brom (were not victories) so it's not the time to be really worried, but we want to come back on Saturday and win the game."

Lukas Podolski (hamstring), Yana Sanogo (back), Alex Oxlade-Chamberlain, Theo Walcott (pelvis) and Abou Diaby (both knee) remain sidelined, while Jack Wilshere will hope to shake off a knock to his ankle picked up against Dortmund.