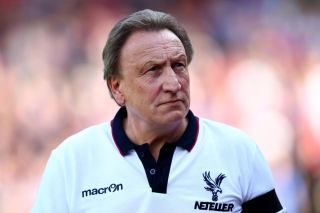 The two sides meet at Selhurst Park on Saturday, with Palace hoping for a repeat of last season's corresponding fixture, which the hosts won 1-0 in March thanks to a John Terry own goal.

That victory signalled the start of a five-match winning sequence that saw Palace pull clear of the relegation zone under Tony Pulis.

A four-match unbeaten league streak boosted Palace after back-to-back losses at the start of this campaign, although Warnock's men did taste defeat in their last game before the international break - a 2-0 reverse at Hull City.

With Saturday's opponents making a flying start to 2014-15 with 19 points from the first seven matches, Warnock knows his players face a daunting task.

"It's going to take a superhuman effort," he said. "It's a difficult task for anyone that plays them.

"You say [Diego] Costa, but [Eden] Hazard, Oscar and [Cesc] Fabregas - they're all top-class players. I worry about our players, not theirs. If you think about theirs you wouldn't sleep.

"Everyone knows what they can do and you've got to hope they have an off day. You can help that by being well organised yourselves and I think we've got people who can cause problems for them.

"We've got to get our major players into the game as well and that's what we're trying to do. Better teams than us tried to beat them and failed so we have to do something special."

In Costa, Chelsea boast the Premier League's leading scorer, the Spain international having netted nine times since his July move from Atletico Madrid.

Jose Mourinho was outspoken in his need for a world-class striker last season and many see Costa as the final piece in the jigsaw as Chelsea look to clinch a first league title since 2009-10.

"Right now, there is no better number nine than Costa," said Hazard, who feels he is benefiting from the forward's presence in the team. "He is the type of striker who can unlock a rotten game.

"He also has a great mentality. He gives everything for the team, perhaps sometimes too much!

"He is such a dangerous number nine, he inevitably attracts defenders. So there is definitely less attention on me.

"Especially since the opposition also have to keep an eye on Fabregas, who can make the difference with the quality of his passing. So I have a little more space."

Palace's only absentee is defender Scott Dann, who was carried off on a stretcher with an ankle injury during the defeat at Hull.

Chelsea have doubts over Didier Drogba (ankle) and Ramires (muscular), while Andre Schurrle missed Germany's Euro 2016 qualifier against Republic of Ireland on Tuesday through illness.