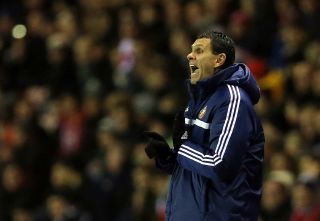 While Gus Poyet's men remain bottom of the table, they have picked up successive wins in knockout competitions since being beaten by Aston Villa in their last league outing.

After successfully avoiding a slip-up against third-tier outfit Carlisle United in the FA Cup on Sunday, Sunderland seized the initiative in the first leg of a League Cup semi-final against Manchester United two days later, triumphing 2-1 at the Stadium of Light.

Although a victory over Fulham would not be enough to lift Sunderland out of the relegation zone, they have the opportunity to significantly reduce the five-point gap to Rene Meulensteen's men 16th-placed side and potentially move level on points with Crystal Palace, who are 18th.

Sunderland can also reach the landmark of 7,000 league goals by scoring twice.

Poyet is able to take encouragement from a run of four matches without defeat on the road and the form of Adam Johnson.

The winger had a hand in all three goals against Carlisle and also posed Manchester United’s defence plenty of problems after coming on as a second-half substitute, earning the penalty that led to Sunderland's second goal.

"Adam's performance (on Tuesday) made my day," Poyet told The Sunderland Echo.

"I think it was the thing I was most pleased about in the whole game because we need him to play like that regularly."

Fulham were thumped 6-0 by Hull City two weeks ago, but the situation at Craven Cottage appears brighter than when Meulensteen succeeded fellow Dutchman Martin Jol as head coach on December 1.

The London club have picked up three of their six league wins since Meulensteen took charge of first-team affairs and had more shots on target in the fixtures between December 21 and January 1 than any other Premier League side.

However, a lack of defensive solidity remains a major concern, with Fulham having conceded 42 goals in 20 top-flight matches, comfortably the highest total in the division.

The absence of captain Brede Hangeland has been a contributory factor and he remains out of action with a back problem.

Sunderland skipper John O'Shea is in line for his first Premier League appearance since December 21, after returning from a shoulder injury against former club United on Tuesday.