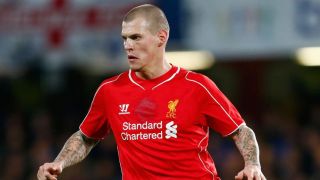 However, a run of four consecutive games without conceding points to a greater defensive stability, while an eight-match unbeaten run has seen them climb to seventh in the table.

Saturday's 0-0 draw at near neighbours Everton provided further evidence of Liverpool's solidity and Skrtel is encouraged by the team's performances in recent weeks.

"We have changed the system to a back three and it is working for us," he told the club's official website.

"We are defending much better. It suits us. I hope we can carry on this way in the future.

"I'm happy for the team, because we have improved our defending. There was a lot of criticism.

"Since New Year, we have only conceded one goal from open play - that's great and I'm happy about that.

"It [the Spurs game] is massive. Tottenham are a few [four] points in front of us. It's going to be a big game, now we have a few days to get ready for it.

"I believe and hope we can beat them and get three points. But every single game is important for us. We'll go game by game, try to get as many points as we can and try to finish in the top four."

Tuesday will see Skrtel come up against arguably the most in-form striker in the division in Spurs' Harry Kane.

The England Under-21 international scored both goals as Tottenham came from behind to defeat north London rivals Arsenal 2-1 at White Hart Lane on Saturday, taking his tally to 22 in all competitions this season.

That victory means Tottenham come into the clash at Anfield one place outside the UEFA Champions League spots, with just one defeat in their past 10 league outings, and head coach Mauricio Pochettino wants to carry that momentum forward.

"Our performance was great because in front of us was a tough team like Arsenal," he said. "It's always a special game.

"We showed a special energy and it's important to keep this feeling. We have to keep going, look forward and move onto the next game now."

Liverpool have doubts over Lucas Leiva, who had to come off at Goodison Park with a thigh problem, while Adam Lallana's groin injury is also a concern.

Daniel Sturridge could be in line for his first start since August as he steps up his recovery from thigh and calf problems, and it remains to be seen whether 19-year-old Jordon Ibe will feature after starring against Everton.

Pochettino, meanwhile, has the luxury of a fully-fit squad to choose from.