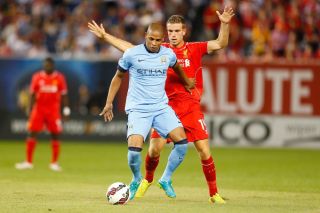 Enigmatic former City striker Balotelli arrived at Liverpool's Melwood training ground on Friday in the hope of concluding a transfer from Milan, widely reported to be worth £16million.

The Italy international is likely to dominate much of the pre-match narrative, with Liverpool playing a club where he remains something of a cult hero despite a combustible two-and-a-half year stay in Manchester.

Liverpool were unable to conclude a deal by midday on Friday, meaning their prospective new signing cannot feature in Monday's game and the front three of Philippe Coutinho, Raheem Sterling and Daniel Sturridge deployed last weekend against

Southampton are set to start once more as the Etihad Stadium provides the backdrop for an early reprise of last season's gripping title battle.

England duo Sterling and Sturridge were both on target in a 2-1 opening win at Anfield and manager Rodgers - who will be without Adam Lallana, Jon Flanagan and Daniel Agger (all knee) - is hopeful of an open contest that will allow such talents to shine.

"If you look at both sets of players, there's lots of invention and creativity - both teams will be creative and want to score goals," he said.

"We know we need to be compact and solid when we haven't got the ball, we need to be aggressive and press well. That's the nature of our game.

"We know we have the freedom, movement and pace that can hurt teams. We understand it's early on, but it'll be a good game for sure. It's been a great start to the league campaign."

The last time the teams met competitively, Liverpool secured a gripping 3-2 victory on Merseyside that looked to have tipped the balance of last season's title battle in their favour.

But City held their nerve, as Rodgers' men dropped points against Chelsea and Crystal Palace, to win a second Premier League crown in three seasons by two points.

Both sides flexed their muscles in a pre-season joust in New York, when Liverpool twice came from behind to win on penalties.

By that time, Luis Suarez had completed his big-money move to Barcelona - a loss City manager Manuel Pellegrini believes will be keenly felt by a Liverpool squad he still rates very highly.

"I watched Liverpool's game [against Southampton] and we played against them in the United States," he said. "We know what they are doing.

"It's difficult to say after one game but Liverpool will always miss Suarez, he was a very important player. They have brought a lot of important new players and continue being a very strong squad also."

City remain without striker Alvaro Negredo due to a broken foot, but Pellegrini has increased options elsewhere as his returning World Cup stars build their fitness.

Pablo Zabaleta or Bacary Sagna are likely to displace Gael Clichy, who featured at right-back in their opening 2-0 win at Newcastle United.

Sergio Aguero came off the bench to complete the scoring at St James' Park and will push Stevan Jovetic for the starting berth alongside Edin Dzeko in attack. New signing Eliaquim Mangala is not yet fit to play.