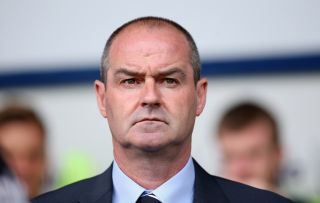 Steve Clarke's side have not lost a league fixture since the start of September, with an away victory over Manchester United and a draw at home to Arsenal underlining their excellent form.

They will be confident heading to the Britannia Stadium given that they have not lost in their last three visits, but they have only won one of those matches.

After Stoke's strong start to the season they have not picked up a point in their last three games and are the lowest scorers in the division with four goals.

Mark Hughes' charges have scored with just 5.8 per cent of their shots this season – the lowest ratio in the league – and Matthew Etherington knows they have to improve.

"We're looking fairly good but it's all about putting the ball in the back of the net and making better choices in the final third," the midfielder told Sky Sports.

"We're struggling to score goals at the minute and it's something we've got to address very quickly because the only way you get points in this league is by scoring goals."

Victory on Saturday would be Hughes' 100th as a manager, but goals have been hard to come by in this fixture, with only 13 scored in eight Premier League meetings.

Stoke will welcome back Jonathan Walters, Marc Wilson and Marc Muniesa to their squad, and have no new injury worries.

However, there is some good news for the Scot with the return to fitness of Victor Anichebe, Matej Vydra and Jonas Olsson.