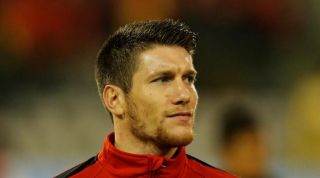 Pocognoli will be assessed ahead of Tuesday's game, while Irvine hopes midfielder James Morrison returns from injury as Albion bid to end a run of three games without a goal or a point.

"Seb has a dead leg, we think," Irvine told reporters. "He and Chris Brunt slid in at the same time and it seems he came off worse.

"All we can do now is assess him and see how he is.

"Dead legs can be a problem because you never know how quickly they will settle down. But we will keep our fingers crossed that he will recover in time for the West Ham game.

"James came in to train on Friday but clearly wasn't right. He did a light session and looked physically awful.

"Unfortunately it's been one thing after another since he went on international duty. He's had two illnesses, toothache and a sore knee. We will see how he is early this week."

West Brom, who will be without suspended midfielder Claudio Yacob, are hovering precariously two points above the relegation zone, while West Ham have far loftier aspirations after Saturday's hard-fought 1-0 win over in-form Newcastle United lifted them back up to fifth in the table and ended three winless outings.

A second consecutive home clean sheet laid the foundations for Aaron Creswell to contribute at the other end with the decisive goal and fellow full-back Carl Jenkinson feels United have settled into a solid defensive unit.

"We're getting to know each other really well as a back five, as such. It's not just the defenders, actually,"Jenkinson, who is at Upton Park on loan from Arsenal, told West Ham's official website.

"The midfield have really been putting in an effort and tracking runners, they're just as important as the defenders.

"It's been a real team effort and I think defensively we've been really good the last few games.

"Saturday's game took a lot out of the boys, so we need to rest up, do the right things and be ready for Tuesday, because it's another very important game.

"But the way we're playing at the moment and the confidence we've got in the side, we're more than capable of doing it."