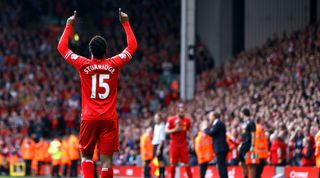 That prodigous scamp was a precocious Daniel Sturridge during his early years at Manchester City, where Fowler spent three years from 2003-06.

But while the man Anfield's Kop used to call 'God' knew of the potential star waiting to make his mark, little did he know it was Sturridge who would be following in his footsteps hoping to scale the same heights on Merseyside.

Fowler's 183 goals is a haul his successor can only dream of for now, but having netted 19 goals in just 25 appearances for Liverpool since his January switch from Chelsea, Sturridge's Reds spell has started in style.

But can he achieve the same recognition as his former team-mate?

"Of course," said Fowler, speaking exclusively to FourFourTwo. "Daniel has always been a good player. I was lucky enough to play with him at Manchester City when he was only 15 or so and you could see how good he was then.

"He had a bit of everything, and what was particularly notable at that age was just how confident he was. You have to be careful with confidence because a lot of people can think it's arrogance, but Daniel had it in abundance.

"He was nutmegging the likes of Sylvain Distin from an early age so you could tell he had no fears. I had a few conversations with him; he wasn't shy and would speak to everyone in the dressing room.

"Obviously he's gone on to play for Manchester City and Chelsea without having played as many games as he would have liked, but since joining Liverpool his form has been tremendous. Whether that's down to Brendan Rodgers signing him and having that belief I'm not sure, but I also think Philippe Coutinho's signing helped him until he got injured.

"What makes it even sweeter for Daniel is that he missed all of pre-season with injury, so when he's fitter he could get even better."