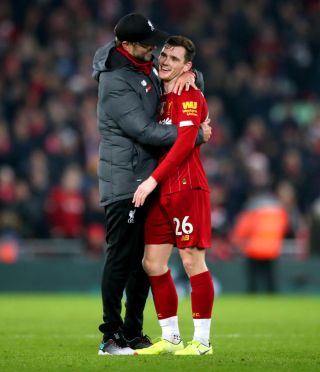 Fantasy Premier League managers won’t hesitate to turn their back on a player who isn’t delivering the goods, but how willing are they to forgive and forget?

Here, we take a look at three players whose ownership has drastically decreased since the start of the season, and ponder whether welcoming them back into the FPL fold might be prudent.

From a left-back with an engine to a forward with an England spot to play for, should you make space for one of these?

It would be unfair to label Andy Robertson a flop, but his FPL ownership has dipped significantly since the start of the season from 34.7 per cent in gameweek one to 20.6 per cent ahead of GW27.

The Scotland left-back flew into plenty of teams at the start of the season, but despite a 123-point haul thus far, is losing out to his colleague on the other side of the pitch.

Trent Alexander-Arnold has 12 FPL assists this season, which dwarf most other players’ returns including Robertson’s respectable six. The Scot however is significantly cheaper (£7m) than TAA (£7.7m) as a result, which should make him more appealing.

He also has six or more FPL points in eight of his last nine games, while the Reds don’t face any of last season’s top six until April – is it time for Robbo’s return?

A Toffee to chew on

Not far from Anfield is another full-back whose form hasn’t quite lived up to the expectations of managers at the start of the season – Everton’s Lucas Digne.

The Frenchman registered four goals and five FPL assists last season resulting in a host of FPL managers backing him in August, but since then his ownership has dipped from 25.8 per cent to just 13.1 per cent.

This can partly be attributed to Everton’s poor form and defensive weaknesses, but just one defeat in eight league games since Carlo Ancelotti’s arrival at Goodison Park suggests the players might be a more reliable FPL gamble now.

Digne’s capacity to create chances remains, with five FPL assists this season, and his Creativity scores have been strong also – is there room in your squad for the 26-year-old?

Further up the pitch, Callum Wilson announced himself to the Premier League with a breakthrough 2018/19 season, scoring 14 goals and registering 12 FPL assists in a remarkable campaign.

As a result, more than a fifth of bosses selected the Cherries forward at the start of 2019/20, but since then his ownership has dropped to less than five per cent.

Wilson’s 17-gameweek goal drought no doubt has a lot to do with that, but recent form suggests the England striker – who will be vying for a place at Euro 2020 – could still be worth considering.

With two goals in his last three games since the drought, Wilson is also registering consistent Threat scores on the FPL’s website. At £7.4m, is he worth having as a mid-priced option? Perhaps.