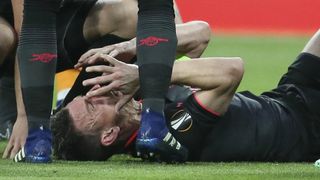 France defender Laurent Koscielny has been ruled out of the World Cup, the French Football Federation (FFF) has confirmed.

Koscielny went down injured in the opening stages of Arsenal's Europa League semi-final defeat to Atletico Madrid on Thursday, with Arsene Wenger suggesting he had ruptured his Achilles.

While the FFF did not confirm the specifics of the centre-back's problem, it was announced he will be unable to travel to Russia to represent his country.

"It's a very big blow for the French team," said Les Bleus coach Didier Deschamps. "An injury never comes at the right time.

"I am really very sad for Laurent because this World Cup was also a very important moment for him in his career and I wish him strength and a good return to the field because I'm sure he still has some great things to show."

Koscielny, who has been capped 51 times by France, previously indicated he would retire from international football after the World Cup.