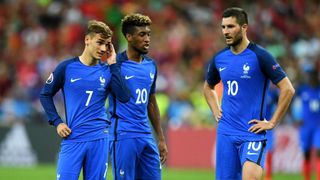 France will be a better side at the World Cup for having experienced the pressure of hosting the European Championships, according to Louis Saha.

Les Bleus have underwhelmed in recent years, last challenging meaningfully at a major tournament in 2006, but they nearly clinched the Euros on home turf in 2016, coming unstuck against Portugal in the final.

Although France again left the public disappointed with their failure to secure silverware, former international Saha believes it was an experience that will benefit the team in Russia.

"France have shown some consistency for the last four years. They keep getting better and the level has increased," Saha told Omnisport.

"The players know each other better - some players are stronger now and bring confidence. These are the good things. We have talent in every position.

"I also think that the competition we played at home, under pressure, allowed the younger players to prove themselves. They can now play at the World Cup with much more confidence.

"I feel confident that France are one of the favourites."

Mikael Silvestre, Saha's former France and Manchester United team-mate, also sees the Euros as a platform to build on, acknowledging that good fortune is a requisite for World Cup glory.

"I think this group is one of the best picked for the national team," he said. "But in the World Cup, you need a little bit of luck.

"During the final against Portugal at the Euros, the luck was for Cristiano [Ronaldo] and the Portuguese. Hopefully, this time, it will be for the French national team."