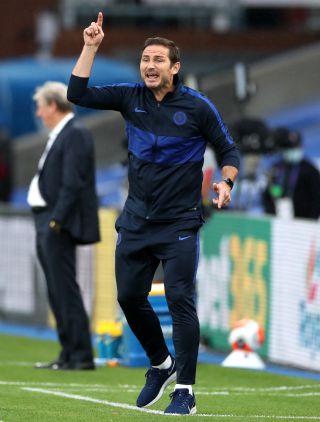 Frank Lampard insists big-spending Chelsea will not “jump too far ahead of ourselves”, pouring cold water on an immediate Premier League title challenge.

The Blues are in talks to bring in Rennes goalkeeper Edouard Mendy as extra competition for Kepa Arrizabalaga, and have long eyed a deal for West Ham’s England international Declan Rice.

But despite that major summer investment on a Stamford Bridge overhaul, manager Lampard has moved to manage expectations ahead of the new season.

“I’m not interested in other people; other people can talk about whether we challenge for the title or not,” said Lampard.

“For me, we finished a lot of points behind Liverpool and Manchester City in the last two seasons, as has everybody else, that’s the way that the league has gone.

“So we have to first look at closing the gap, and build confidence, by getting the team working well together. I’m not jumping ahead and making any predictions on us.

“I hope Chelsea fans are excited because I am not going to lie, we have brought in a high level of player that we feel will improve our squad.

“At the same time, I also know what it takes to win the Premier League. I know that as a player and I know when I look around.

“When you look at the teams that have dominated in recent years, and your eyes are drawn to Liverpool and Manchester City, they are a story that has run over a few years, at their own pace at different times, but in terms of recruitment and coaching on the training pitch, it then relates onto the pitch.

“I know expectations will be there. I won’t hide away from that. My expectations are on a different level from last year because we are in a different situation. We want to improve but we won’t jump too far ahead of ourselves.”

Chelsea will launch their new campaign at Brighton on Monday night, with new recruits Ziyech and Chilwell both sidelined through injury.

The Amex Stadium trip may come too soon for Brazil defender Silva, but Germany team-mates Werner and Havertz should both feature.

“The pressure on me to do better than last season should be standard, regardless of anything… and that comes with the territory of this job,” said Lampard.

“I don’t want to talk about us making a statement, I understand the players brought in will obviously get a lot of talk about us.

“Last year we were very happy to achieve a finish in the Champions League positions, we know we’ve been on a transfer ban from the year before, and the fact we were very joined-up on the business we wanted to do, I think we’ve done it in a good way.

“We want to move in an upwards direction, of course we do, and the work starts now.

“The work started recently and unfortunately it’s been a broken pre-season for everyone, and we brought in new players across that pre-season, you have to work very hard very quickly, and we’ll do that.

“No matter what goes on at the club, there will always be pressures. I thrive off those pressures and I enjoy them. I understand the different nature of pressure coming this year. It is why I love doing it.

“I didn’t come into this job to fight for fourth place, although I know last year that it was an achievement and one of our goals that we set out to.

“I didn’t come in to just bring academy players into the first team and say I made debuts for this many players; I came here to win.

“This year the club has been able to make decisions to bring in players. It changes the landscape, yes, but I am excited by that as much as feeling the pressure. I am ready to go and work.”