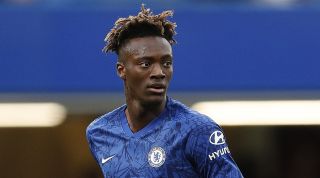 Chelsea manager Frank Lampard says he hopes to see Tammy Abraham and Fikayo Tomori commit their futures to the club.

Both academy products have enjoyed excellent starts to the season after breaking into the first team under Lampard.

Abraham has scored eight goals in nine Premier League appearances in 2019/20, while Tomori has impressed at centre-back in recent weeks.

The two players are in discussions with the club over new deals and Lampard says he hopes both sets of talks will end with a positive outcome.

“Of course, I do [want them to stay]. That goes slightly out of my remit when they are dealing with the club. The club know I love the players, I brought them into the team this season.

“They are doing particularly well but I leave those conversations to the club to discuss contracts but, of course, I want them to be here for a long time.

“That’s the conversation for me and the club I suppose. I made it clear that they are playing very well and I want them to stay.”

Chelsea are currently halfway through a two-window transfer ban after being found guilty of breaching FIFA regulations on the signing of under-18 foreign players.

However, the Blues have appealed the decision to the Court of Arbitration for Sport and hope to be free to make signings in January.

"I don’t know, is the answer. I don’t know if we can," Lampard replied when asked if he thought the club would be permitted to participate in the mid-season market.

“It is not in my hands so I wouldn’t want to speculate if we can or can’t. At the minute we can’t. I'm just concentrating on what is ahead of us with the squad we have now.

"A club like Chelsea, we will always be looking at ‘can we improve the squad?’ If there is the potential to bring players in… At the moment I don’t know the answer.”