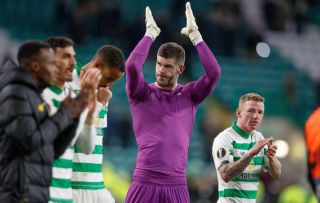 Celtic have set their standards this week ahead of the trip to Aberdeen on Sunday, according to goalkeeper Fraser Forster.

The 31-year-old, on loan from Southampton, was a stand-out performer in the 2-1 Europa League win over Lazio on Thursday night with two saves from Marco Parolo and Danilo Cataldi described by opposition boss Simone Inzaghe as miraculous.

That thrilling victory kept the Hoops top of Group E with seven points from three fixtures and came after a 6-0 thrashing of Ross County at Celtic Park last weekend took them top of the Ladbrokes Premiership.

There is no respite for Neil Lennon’s side as they prepare for Pittodrie but Forster is keen to carry on the good work at the high level displayed in the recent two victories.

He said: “It’s brilliant, we want as many games as possible and, obviously, it’s a quick turnaround for Sunday but you know we’ve got no choice.

“We just need to professional, recover well and get ready to play.

“It is another very important game, one that we need to win and the two results we have had this week, in the league and in the Europa League, that’s the standards we have set.

“We don’t want to drop below that so we want to go into Sunday’s game and get back on it.”

Forster’s decision to return to Celtic was vindicated against the Serie A side in what was another exhilarating European night at Parkhead where Lennon’s side eventually came out on top thanks to a late header from French defender Christopher Jullien.

The Englishman joined on loan from Saints in the summer for his second spell at Parkhead, after 18 months of inactivity at St Mary’s, and is glad to be back playing, especially on the big occasions.

He said: “When I found out there was a chance to come back here in the summer I couldn’t get back here quick enough.

“To get back playing at a place I really feel loved, appreciated and wanted, after a very tough 18 months, is really nice and that’s the reason I came back to play in games like that, in that stadium on those nights and everyone sees how special it is.”

Celtic skipper Scott Brown was particularly impressed by Forster’s save from Cataldi’s long-range strike in the closing seconds of added time.

He said: “It was probably one of the best saves I’ve ever seen.

“But that’s why we brought him to the club, that’s why the manager believes in him and there was another save 10 minutes before that when he got his body in the way.

“We have three fantastic goalkeepers and they all make saves like that and that’s great competition for each other.”