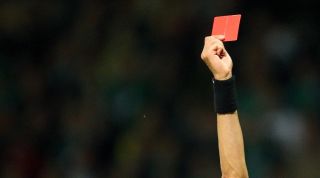 An amateur footballer in France has been suspended from playing for five years after biting an opponent's penis.

La Republican Lorrain reports of the incident, which took place after a second district division match between Terville and Soetrich.

Following the game a player from each side got into a fight in the stadium car park. A third player, from Terville, stepped in to try and break it up and that was when he was bitten on the penis by the Soetrich footballer.

The victim required 12 stitches and had to take four days off work. He has also been given a six-month suspension.

"It's quite rare to have sanctions of several years. There are fewer than 10 per year," said Emmanuel Saling, director of the Moselle district that issued the ban.

"The case was a bit saucy, but ... there must have been some nasty tension, so the smiles on the disciplinary committee quickly faded."

Terville, who hosted the game on November 17 after which the incident took place, have also been deducted two points and fined 200 Euros for failing to meet their security obligations. They can appeal that decision.