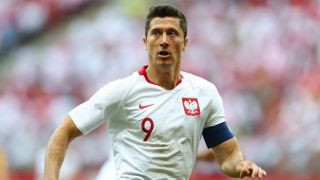 Robert Lewandowski warned he is feeling fresh and is looking to make an impact for Poland at the World Cup.

The striker wants Poland to improve on their showing from Euro 2016, when they reached the quarter-finals before being knocked out by eventual champions Portugal on penalties.

Lewandowski played close to 500 fewer Bundesliga minutes this season than he did heading into the tournament in France, and he hopes to reap the benefits of that reduced workload in Russia.

"If we compare the preparations with those from before Euro 2016, it is completely different," said Lewandowski.

"I am also coming off a different season at club level than two years earlier. This time I have played fewer minutes and matches.

"I hope that you will see freshness [from the team] in the whole tournament and the form will be improved from the first match.

"After a dozen or so years of drought, we are back at the World Cup and I hope we will show our best. I hope the fans will remember us as much as the teams from 1974 and 1982."

Poland captain Kamil Glik will miss their opening Group H matches against Senegal and Colombia due to a shoulder injury reportedly sustained while attempting a bicycle kick in training.

Lewandowski said: "I know this situation perfectly because I've had the same injury. Knowing Kamil, how he endures pain and how he deals with injuries, his return pleased us all.

"I hope he will quickly return to form, be able to train and fight with us. If he says he is ready to play and fight, it will be clear on the pitch."