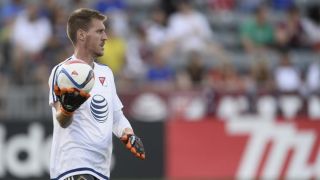 TORONTO — Clint Irwin is an "upgrade" at the goalkeeper position for Toronto FC, according to the club's general manager.

TFC targeted an offseason overhaul in the back end, after the team allowed a league-worst 58 goals in the MLS regular season in 2015.

With Monday's acquisition of Irwin, TFC feels that the defensive unit is now much stronger. Irwin's arrival comes on the heels of former league all-stars Drew Moor and Steven Beitashour having also joined the club several weeks ago.

"Something was off last year, collectively as a unit," TFC general manager Tim Bezbatchenko said in a teleconference with Toronto media on Tuesday. "We felt like we needed to make a change and have a fresh start."

While Bezbatchenko was responding to a question specifically about Irwin, who is expected to take the No.1 role in place of departed veterans Chris Konopka and Joe Bendik, he was speaking in the context of a completely rebuilt defensive corps that will be relied upon to stem the tide of goals against at BMO Field.

To that end, Bezbatchenko highlighted Irwin's chemistry with Moor—the pair anchored a Colorado Rapids defense that allowed a relatively stingy 43 goals in 2015.

Irwin, too, pointed to his relationship with Moor as a positive heading into their first preseason with TFC.

"He was one of my favorite teammates in Colorado so I was pretty disappointed when he left," Irwin said. "And now, to be reunited with him is awesome, and it'll help make that transition a little bit smoother."

TFC's front office is confident that Irwin is not only a step up from Konopka and Bendik — who split the starting job last year — but also that the 26-year-old is one of the best goalkeepers in MLS.

Bezbatchenko stated that he wants all of Toronto's players to be "in the top 10 to 15 percent in their positions," a range in which he feels Irwin could fall into while playing a TFC side growing in talent.

"It's difficult to say that he's not one of the top goalkeepers in the league and we feel like with the players in front of him we can even help him to some degree, hopefully, to be an all-star every year," Bezbatchenko said.