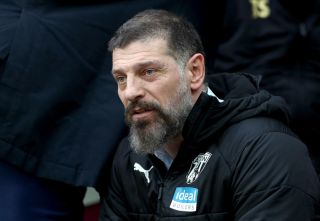 Slaven Bilic emerged from a lengthy dressing room inquest to warn West Brom’s promotion ambitions will be over unless they “get the team back”.

West Brom lost top spot in the Sky Bet Championship to Leeds after slipping to a 2-1 defeat at Cardiff on Tuesday, stretching the Baggies’ winless run in the league to seven games.

Albion upset West Ham in the FA Cup on Saturday but the revival was short-lived as Charlie Austin’s equaliser from the penalty spot counted for nothing with Callum Paterson and Lee Tomlin giving Cardiff victory.

“I told the guys we need to look at each other, not as soon as possible but now, to what get back what we had.

“We don’t have it at the moment. We can’t say we were unlucky for seven games, we can’t blame anybody but us.

“We have to get it back. Simple as that. We weren’t good enough, and we can’t concede goals like this.”

West Brom were 12 points clear of third place on December 14 after winning 3-2 at Birmingham – but their advantage over third-placed Nottingham Forest is now just two points.

“I can’t be any harder, I spoke quite long in the dressing room,” Bilic said.

“We need it back, we need the team back. We have to get back on a winning track, first of all stop conceding goals.

“We have to do it, what we are doing at the moment is not good enough – we have to do more. That is our aim now, that is our job now.”

Cardiff manager Neil Harris revealed match-winner Tomlin, who came on as a second-half substitute, had been struggling with a knee injury and was not even in the squad until hours before kick-off.

“Lee hasn’t trained for four days, he wasn’t in the squad at all until this morning,” Harris said.

“He wasn’t in the training group, he’s had a knee injury. Just a niggle, and he felt uncomfortable.

“In the conditions at the moment, the pitches are so wet that you tend to slip quite a lot. So, we have to be really careful with him.

“But he showed his temperament to want to play and come off the bench and put himself forward, and also his quality and class when he came on.”

Harris added that he wants veteran defender Sol Bamba, who was among the substitutes against West Brom, to stay at the club.

Bamba said on Tuesday that he was open to the idea of going out on loan before the transfer window closes on Friday in order to play first-team football.

“We’re certainly not thinking about him going anywhere,” Harris said.

“What’s great about that is Sol is desperate to play football.

“When he’s played, he’s done really well and he’s got that burning desire to still do it. Hopefully it’s in a Cardiff shirt.”