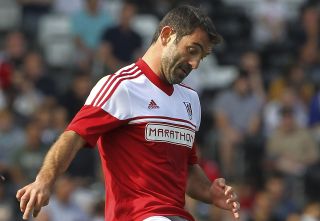 Manager Martin Jol has added Derek Boateng and Adel Taarabt to the midfield ranks ahead of the new season and Karagounis has been impressed with their quality.

Karagounis, who signed a one-year contract extension at Craven Cottage in June, is the experienced head in Jol's squad and the 36-year-old is ready to guide the younger players.

"There are a lot of good midfielders at this club with great quality, which is good for the team and provides healthy competition," he told the club's official website.

"This can only be good for the players and the team as a whole in order to progress and for the level to remain high.

"If the younger players look upon me as a good role model then I'm only too pleased to be available to help them if they have any questions.

"It gives me a lot of pleasure to help them because I can see a lot of quality among the younger players at Fulham.

"I think they have a great future ahead of them, not only individually but to do well for the team.

"They are a superb group and one day, they too will be required to be even better ambassadors for the club and to pass on their knowledge to the young players."

Fulham open their Premier League campaign with a trip to Sunderland on August 17.