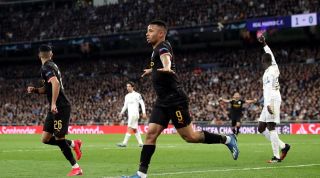 Manchester City striker Gabriel Jesus has hinted that he could be open to a move to Real Madrid in the future.

Several City stars have been linked with a move away from the Etihad Stadium after the club were hit with a two-year ban from European competition.

The reigning Premier League champions will appeal the punishment that was handed to them by UEFA for breaching the governing body’s Financial Fair Play regulations.

However, the decision has left the club's players in limbo and made it more likely that key members of the squad will seek an exit.

Jesus starred in City's 2-1 victory over Real Madrid in the first leg of their Champions League last-16 tie on Wednesday, after which he was asked if he could envisage one day representing los Blancos.

"I have a contract with City and I am very happy with the season I am having, being able to play, score goals and help my team," he told AS.

"I am very happy with the year I am having and I'm not thinking about transfer issues.

"I am still the same dreamer as I was when I was wearing the Palmeiras shirt, the boy who wanted to conquer great things and achieve big goals.

"I am still very young, despite having already won important titles in my career. I always want more and to fly high."

Pep Guardiola started Jesus in an unfamiliar role on the left flank at the Santiago Bernabeu, but the Brazilian netted the all-important equaliser after being moved into a central berth late on.

"Wednesday was one of the most important and significant goals of my career,” he added. “It was a very difficult game, we all know the importance and size of Real Madrid. That is why I say that I am very happy and sure I will always remember this great night.

"But now we have to focus on the return match. There is nothing done or resolved, we do not trust [that we are through] – they are Real Madrid. They have a lot of quality and we will have to concentrate."

Guardiola's side face Aston Villa in the League Cup final on Sunday.