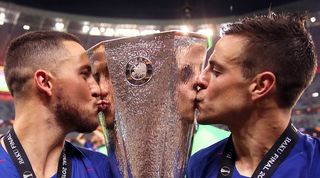 Poor Europa League. It’s the Phil Neville of sporting competitions; the Jamie Murray, the Dannii Minogue - watching its publicly-adored sibling from the wings of the stage, wondering when it’ll be its time to shine. Any day now, eh?

The Champions League has a flashier name. A more epic anthem. A sexier ball. Better teams. It chucks its hand-me-downs to the Europa League - “Here, have an Ajax team we don’t want anymore” - and the gulf between two competitions has never been more obvious. Especially with the mouth-watering last-16 ties that the European Cup proper served up this time around.

Surely the Europa League has more to offer than what it currently does?

Get rid of the drop-outs

So UEFA’s big plan was to cut the distance between the UEFA Cup and the Champions League, to make them feel a little more related, and thus, make them feel like a similar quality of tournament. OK - fair enough.

And then there’s the issue that some years, the dropout sides are just too good for the rest - see Sevilla, Atletico Madrid and Chelsea. Whatever comparison is being drawn to the Champions League, it’s not doing the Europa any favours.

Another way that UEFA wanted to bring the Europa and Champions League together was in the mirroring of format. Prior to 2004, the UEFA Cup was a straight knock-out - now it has its initial warm-up group stage, just like its superior sibling, before the drama of the two-legged tie after Christmas.

It would be better to draw a line between the competitions. How about straight knockouts over two legs all the way in the Europa? They provide more excitement than a group stage and dumps most average sides out of the competition quickly – while increasing the chances of a few beloved cup upsets.

This reform would implement a league-and-cup dynamic to the two European tournaments – one would be an endurance race, the other would be swung by luck.

Not unreasonably, UEFA feels an increasing duty to represent more league winners from across Europe's sprawling states in its continental competitions. That’s one of the reasons behind a third continental tournament, the Europa Conference League, set to sit below the Europa League from 2021 onwards (yay).

Most western clubs already roll their eyes at the prospect of a trip to Kazakhstan in the autumn, but regionalising the Europa League would do a number of things. It would give more opportunity for Eastern European teams to progress in the tournament. It would pair up Western teams for more exciting (and arguably competitive) clashes. And it would mean that by the time you do have to travel two days for a match, it’s for a fixture that actually matters.

On the subject of fixtures - there’s too many.

UEFA are planning to cut the Europa League to 32 teams and it’s about time too. There’s one more knockout round in the Europa than there is in the Champions League - finalists of the tournament have to play a minimum 16 matches. That’s a ridiculous amount of games and most of them are currently just an opportunity to blood youth.

If Wolves get to the final this year, they’d have played 21 games. If governing bodies are serious are fixture congestion, surely something has to give.

If you’re tuning in to watch BATE Borisov vs Hoffenheim at 6pm on a Thursday, you’re probably wasting your life. Sorry, not sorry.

The Europa League feels like it’s simply played at the times most convenient for the Champions League. It forces clubs to play their domestic matches on Sundays, with many not even being televised. With fewer rounds and teams in the Europa, would it be possible to play it on weeks that the Champions League doesn’t convene?

One thing’s for certain, 6pm kick-offs are not fun. Neither are the odd 3.50pm games. Early evening kick-offs make sense for matches in different time zones, but not for ones in north London, for instance.

Ditch them, please - club football is never an event you should miss because you work a 9-5 job.

Give teams - and fans - more incentive

Right now, Arsenal and Manchester United have one reason to take the Europa League seriously: if they win it, they don’t have to play it next year. That doesn’t exactly spark excitement about the tournament as a whole.

Maybe more prize money is needed. Perhaps UEFA could rework the current structure of awarding coefficient points for teams that progress through their European competitions. And given the fiasco over the Baku-hosted final last year - both Arsenal and Chelsea received very few tickets for the event - it would be a good start for UEFA to fix their relationship with fans and hand out more tickets to them this year.

This goes back to the scheduling of the tournament and the distances teams have to travel. Give clubs and their supporters a reason to get excited about this cup - and not just that the best team in it gets invited to a better one next year.

The Cup Winners' Cup was a tournament for an era when a day out at Wembley was more important than finishing top four. These days, 'CWC' now stands for Club World Cup and cup competitions around Europe now play second-fiddle to a league assault and European endeavours.

One answer would be to work with domestic leagues to reform their cup competitions. Keep the FA Cup as it is, for example, but limit the League Cup to teams not in Europe. Give one of the Europa spots to the winners of the League Cup.

It’s a hard sell, admittedly - “Why don’t you exclude your six most popular teams from this tournament?” - but it could see more Europa League spots given to clubs like Wolves and Everton, who have actually relished a Europa League run in years gone by, while not excluding the bigger guns like Arsenal and United – both of which tend to play weakened teams in the early rounds of both the League Cup and Europa League, anyway.

Revert to the old name

It was 2009 when UEFA announced its big reforms to the UEFA Cup. It seemed exciting at the time, but by losing the UEFA Cup, it feels like we’ve lost some of the prestige that came with winning it.

In a time predating much of the EU-UK political frostiness, the name “Europa League” felt cool and modern. The branding was a mix of slick black and yellow, and there was an operatic anthem to match the Champions League (both, by the way, could with refreshing).

The Europa was pitched as the next best thing to the premier European tournament. And that’s precisely the problem - who wants to win the next best thing? The Champions League is still referred to as the European Cup, but the Europa League isn’t still the UEFA Cup: it lost any glamour it had built up over decades, and became just another tournament. Imagine they renamed the FA Cup “The Anglo League” or something equally hideous - you wouldn’t be so bothered about Jurgen Klopp entering his U23s, would you?