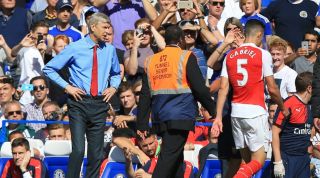 The Brazilian will face the club he left in 2017 when his Valencia side visit north London in Thursday’s Europa League semi-final first leg.

Gabriel spent two-and-a-half seasons working under Wenger at Arsenal but, looking back on his time at the club, he admitted feeling that the Frenchman’s long spell in charge of Arsenal was coming to an end.

“I arrived during Arsene Wenger’s last years and you could feel something different in the locker room straight away,” he told the Independent.

“He helped me a lot to be another kind of person on and off the pitch. He was respected by all the players and staff, but the atmosphere was so noticeable.

“On a daily basis, you could tell these were his last moments at the club. It showed. We knew he could go at any time.”

The 28-year-old left to join Valencia in August 2017 having made 64 appearances for the club, scoring one goal.

Looking back on his time in England, Gabriel doesn’t think he was given the chances he deserved to prove his worth.

“With all respect to Arsenal, I have nothing to prove to them anymore,” he said.

“In the Premier League, I tried to prove my worth but I didn’t get the chances. When I played it was often because of an injury to my team-mates.

“I deserved more opportunities. I was sad because I knew I had the ability to play… but other people didn’t think so. I’ve proven myself here and now I just want to keep showing what I can do for Valencia.”

QUIZ! Can you name the 55 Europa League semi-finalists since 2000?