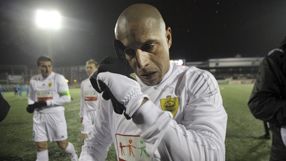 Roberto Carlos, who joined the club in February as a player, said Anzhi had already discussed the possibility of buying England midfielders Steven Gerrard and Frank Lampard from Liverpool and Chelsea respectively.

"I'll have a meeting with the boss [Russian billionaire Suleiman Kerimov] later tonight and we'll discuss plans," the Brazilian was quoted as saying by local media.

"The management of FK Anzhi have decided to relieve head coach Gadzhi Gadzhiyev of his duties," the club said.

Anzhi, who are bankrolled by Kerimov, made huge headlines last month by luring Cameroon striker Samuel Eto'o from Inter Milan on a three-year contract.

According to media reports the 30-year-old Eto'o signed for an annual salary of 20 million euros, making him the highest paid player in the world.

Despite an improvement in form from last season when the team finished 11th in the 16-team league, Anzhi bosses have been unhappy with the club's progress.

Anzhi, who were in fourth place a few weeks ago, dropped to seventh following a 2-2 home draw against Chechen side Terek Grozny on Monday.

Local media had questioned Gadzhiyev's ability to communicate with his top players and linked several high-profile coaches with the job.

Israeli Avram Grant, a close friend of Kerimov, has been tipped to succeed the 65-year-old Gadzhiyev after attending several Anzhi matches in recent weeks.

Asked last week if he was about to take the hot seat, the former Chelsea manager said: "I can't say. Right now I'm just helping the team in a consultant role."

Gadzhiyev has had three different stints as Anzhi coach, leading them to fourth place during his first spell in 2000.

Kerimov has been full of praise for Roberto Carlos, saying he will make the 2002 World Cup winner the club president when he retires from playing.

"It was not a spontaneous decision," Anzhi General Director German Chistyakov said of the Brazilian's interim appointment as joint head coach.

"He has been the team leader on and off the pitch since his first days here and commands a great deal of authority from everyone at the club."

Roberto Carlos said the coaching role would only be temporary.

"My main goal is to continue my playing career," the 38-year-old said on Thursday. "It's a tough job to be a coach and I see myself more as a manager when I retire."

Roberto Carlos said his discussions with Kerimov would also include targets for the role of full-time coach.