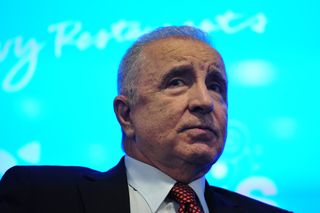 Speaking at the Leaders in Football event in London, Aysal stated a desire to see the biggest clubs from around the continent face each other more regularly in a new-look competition to replace the UEFA Champions League.

It is an issue that has been discussed before and one that divides opinion, with Aysal a keen advocate of it.

The Turkish businessman said: "I think it is the future of football.

"I think it has to be created, not in 10 years, as soon as possible because football is a big industry and a growing industry.

"A European Super League will bring a lot of support and also energise football in general.

"I think it could be 20 big teams for example, in Europe, and three, four or five teams can change every year.

"I think it can be fixed in the proper way in order to make it effective and useful to European football and also to bring new horizons for football in general.

"I think it is better that UEFA will take this initiative and continue to control the football. But whoever will take the initiative will control it."

Aysal recently appointed Roberto Mancini as the new manager of the Turkish champions and is backing the Italian to be a success domestically and in Europe.

Mancini's first game in charge was a 2-2 draw at Juventus in the Champions League. Alongside Juve and Galatasaray in Group B are nine-time winners Real Madrid and Danish champions Copenhagen.

"First of all he is a successful manager and he has good credentials," Aysal added.

"Also Galatasaray needs some change in these days because with two years consecutive success in the Turkish Premier League and also in the Champions League last year we got to the quarter-finals.

"I think that Roberto Mancini will bring a new colour to Turkish football and also to Galatasaray.

"I think Galatasaray is a good tool for him to prove himself in the Champions League."