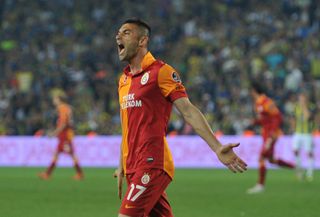 Striker Yilmaz has been linked with a switch to Stamford Bridge after hitting 24 league goals last season, in what was his debut campaign with the club.

The Turkey international came close to joining Serie A side Lazio during the close-season and Aysal says he would not block any potential transfer.

Speaking at the Leaders in Football conference, the Gala chief actively encouraged his striker to strive for a move to a foreign league to prove himself there.

"If he wants to go and Chelsea are interested then of course, why not? I favour Turkish players going to Europe to play in European leagues," he said.

"No (we have not received an offer from Chelsea), not yet.

"We had some requests from Lazio at the end of the summer. But the deal didn't go through because the conditions were not satisfied.

Yilmaz moved to the Turk Telecom Arena from Trabzonspor after scoring 33 goals in 34 league games in 2011-12.

The 28-year-old has scored just twice in six games so far this season with Super Lig champions Gala languishing 13th in the league with just one league win to their name.

That poor start led to the dismissal of Fatih Terim, who has since been replaced by Roberto Mancini.