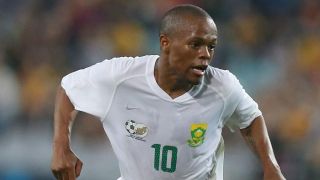 Thulani Serero remains hopeful South Africa can qualify for the 2017 Africa Cup of Nations despite a difficult start.

South Africa are trailing leaders Cameroon by five points with two games to go and face a tall task if they are to top their group and make it to the tournament in Gabon.

However, Serero refuses to give up hopes of qualifying and has urged his team-mates to keep fighting.

"It's a little bit of a difficult situation, but this is football," Serero told reporters.

"I have had a good experience of that this season where I lost the league title on the last day of the season with Ajax.

"We must not give up. If we go out there and put pressure on Cameroon, then there's a chance that they can lose to Mauritania, like we did, and maybe even Gambia.

"It is not in our hands, but getting the last six points can change that."

Gambia, meanwhile, sit rock bottom in their section with two points having managed just one goal from their four matches.

Defender Omar Colley is desperate to make a good impression in Saturday's encounter in Bakau, though, and has vowed to give his all in order to get a good result.

"It is too early to talk about the team, but we all know what it takes to play for the national team and it is a big task because South Africa are not a small nation," Colley told Observer Sports.

"The team is going to give its best and will try to make sure to get the three points."

Gambia will have to do so without the England-based duo of Modou Barrow of Swansea City and Middlesbrough's Mustapha Carayol, who have both withdrawn from the squad due to injury.

South Africa and Gambia played out a scoreless draw when they last met in Durban in June 2015.