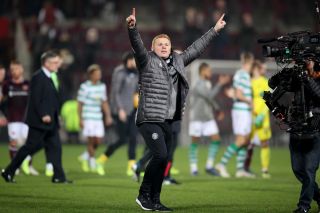 Celtic chalked up their eight successive title after a 3-0 win at Aberdeen.

It was a season in which the Parkhead side had to contend with a rejuvenated Rangers and the loss of all-conquering boss Brendan Rodgers but the players coped with it all as they strolled to the club’s 50th domestic league crown.

Steven Gerrard’s new-look Ibrox outfit arrived at Parkhead for the first derby clash of the season on a high after scraping past Russian side Ufa with nine men to book a Europa League slot. Their next target saw them set eyes set on reversing the Old Firm pecking order but Olivier Ntcham grabbed the Hoops’ winner as Celtic showed they were still the team to catch with a dominant display.

Boss Rodgers said afterwards: “I thought we performed exceptionally. Allan McGregor has made some outstanding saves, we hit the crossbar, it probably kept the scoreline down a little bit. It was an outstanding win for us and equally a very good performance and I am delighted.”

Gers got themselves back on level terms with their bitter rivals with December’s Ibrox win but then froze on the return from the winter break as they slipped to defeat at Rugby Park. Rodgers’ team, on the other hand, returned refreshed from a sunshine trip to Dubai and boosted by the January additions of Oliver Burke and Timothy Weah and set about re-establishing their lead. They left it late on their own trip to Killie but Scott Brown’s last-minute winner underlined Celtic’s determination to grab eight in a row.

After the game, Rodgers said: “We weren’t settling for a draw. It is never easy here, you have got to break through their block and they are very well organised. You know there are not going to be many chances so you have got to be ready.”

The surprise departure of boss Rodgers to Leicester with three months of the season still to run rocked the Celtic faithful. But chief executive’s Peter Lawwell’s decision to re-appoint former manager Neil Lennon swiftly to his old position on a short-term deal ensured there was no wobble. The champions continued their confident strut towards the title with another late show as the Northern Irishman returned to the Hoops dug-out at Tynecastle, where Odsonne Edouard’s stoppage time winner sealed the points.

Lennon said after his first game in charge: “I’m ecstatic. It’s a great win at a difficult place under the circumstances. You never stop believing with this group that they might make something happen. I can’t knock the players. The mentality is absolutely brilliant and I can’t fault them tonight. It’s a brilliant win and psychologically huge.”