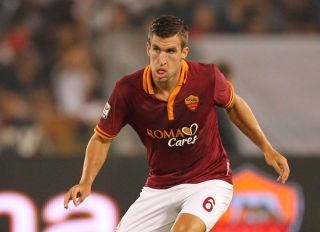 Netherlands international Strootman has played just six minutes for the Serie A side this season after tearing a cruciate ligament in his left knee against Napoli at the end of March.

The setback ruled him out of the remainder of the last domestic season as well as the World Cup in Brazil, but the 24-year-old - whose solitary appearance this term came as a substitute in the 3-0 win over Torino last month - could return to the starting XI at the Stadio Olimpico this weekend.

"Could Strootman start the game? He needs to play, so him starting is a possibility," Garcia said.

"I'll put out the side that gives me the best chance of getting three points."

Roma sit second in Serie A and will hope that leaders Juventus slip up in a potentially tricky fixture at Fiorentina on Friday.

Garcia intends to watch the game, but his main focus remains on his own team.

"We'll watch the match tonight, but the only thing that matters is us earning three points tomorrow," he added.

"If we win the rest of our games we'll get our just reward. It doesn't matter what the other teams do.

"The league is a marathon and we must make sure we're ready for every game."