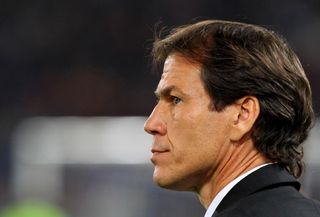 With Juventus conceding a goal in the 94th minute to lose 1-0 at Genoa, Roma's 2-0 triumph over Cesena took Garcia's men level with the reigning champions on 22 points.

But Garcia insisted he was not interested in how Juventus had fared in Genova.

"It was important for us to win, that was all that counted," Garcia told Sky Sport Italia.

"Juve's result is of no interest. I am concentrated on my team and the important thing is Roma go on their journey."

Later at his post-match media conference, Garcia underlined the importance of Mattia Destro's eighth-minute opening goal, which gave the capital club something to work with against Cesena, who defended for the majority of the contest at the Stadio Olimpico.

"We are very confident but when you play against team that defends with 11 players behind the ball you have to break the deadlock sooner than later," Garcia said.

"We managed to get a vital goal early in the first half but the game wasn't over. To be sure of the victory we had to get a second goal and we did that in the second half.

"Tonight we could have scored another two goals at least but Cesena's goalkeeper played very well and we wasted some good chances to score in one-on-one situations."