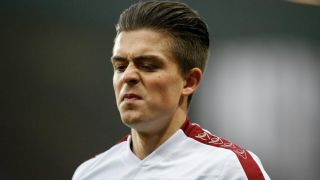 Aston Villa manager Remi Garde has criticised Jack Grealish after a subpar performance in the side's FA Cup third round replay against Wycombe Wanderers on Tuesday.

Grealish has rarely featured under Garde after being pictured in a nightclub following a 4-0 Premier League loss to Everton in November.

The 20-year-old was making just his second start since that game against Everton, but was hauled off on 73 minutes with their tie against Wycombe still goalless.

Late goals from Ciaran Clark and Idrissa Gana spared Villa's blushes against their fourth-tier opponents, but Garde did not hold back in his assessment of Grealish's performance.

"It was Jack’s first game for quite a long time – and I haven’t seen what I wanted to see from him," he said. "He played in the part of the game when we weren’t playing well collectively.

"We were the Premier League team and for the first hour I didn’t see that.

"My team was poor technically for an hour I am not happy about that - but I’m happy with the result because this kind of game is sometimes a trap."

Villa were booed off the park going into the interval and Garde said he used that as motivation for the players.

"With the crowd booing the home team off at half-time, I told them ‘you’ve done yourself a world of good there’. It's a nervy place," he said.

"When fans are nervous tension comes on to pitch the players do feel it, negativity grows so quickly.

"Defeat it is never easy to take but I am extremely proud. I was taking players off who can't run anymore and that makes a manager proud."