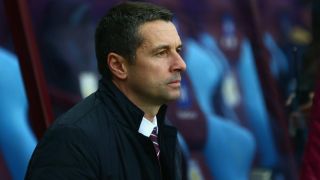 Remi Garde plans to stay on as manager, even if Aston Villa are relegated from the Premier League this season.

The outcome from 2015-16 appears bleak for Villa, who are rooted to the bottom of the table after 19 matches, 11 points adrift of safety, despite the arrival of Garde.

Garde replaced Tim Sherwood on a three-and-a-half year deal in November but the Frenchman has overseen eight winless matches as the threat of relegation from England's top flight for the first time since 1987 looms large.

However, the former Lyon boss does not intend to walk away if Villa are sent down to the Championship.

"I have got a very good feeling in my mind. In every football club there are some difficulties and problems," Garde said ahead of Saturday's trip to second-bottom Sunderland.

"Of course I thought we would have won earlier, but I knew when you come to a club that has played 11 and lost nine you don't expect to find everything going well. If they are, you do not get the call to come in.

"I knew it would be difficult but now I am full of confidence for what we can achieve in this club."