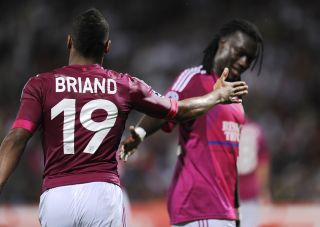 The French club were widely reported to be keen on offloading the high-earning duo during the transfer window, but failed to reach an agreement to move either player on before its closure.

Lyon have had an inconsistent start to the Ligue 1 campaign, winning two and losing two of their opening four fixtures and sit eighth in the table.

And Garde says the attacking pair will be reintegrated into his squad after the international break, even if they are both short of full fitness.

He stated: "I saw them before training. Are they at 100 per cent and ready to be part of the squad again? Yes.

"We have two full weeks ahead of us. We'll take stock after that. I'm very bad at estimates, just as I am at predictions. They're not injured - they trained.

"I imagine that, after two good weeks, they won't be very far off, even if producing on the pitch is something different."

Briand, meanwhile, was linked with West Brom, but also failed to clinch an exit from the Stade de Gerland during the window.